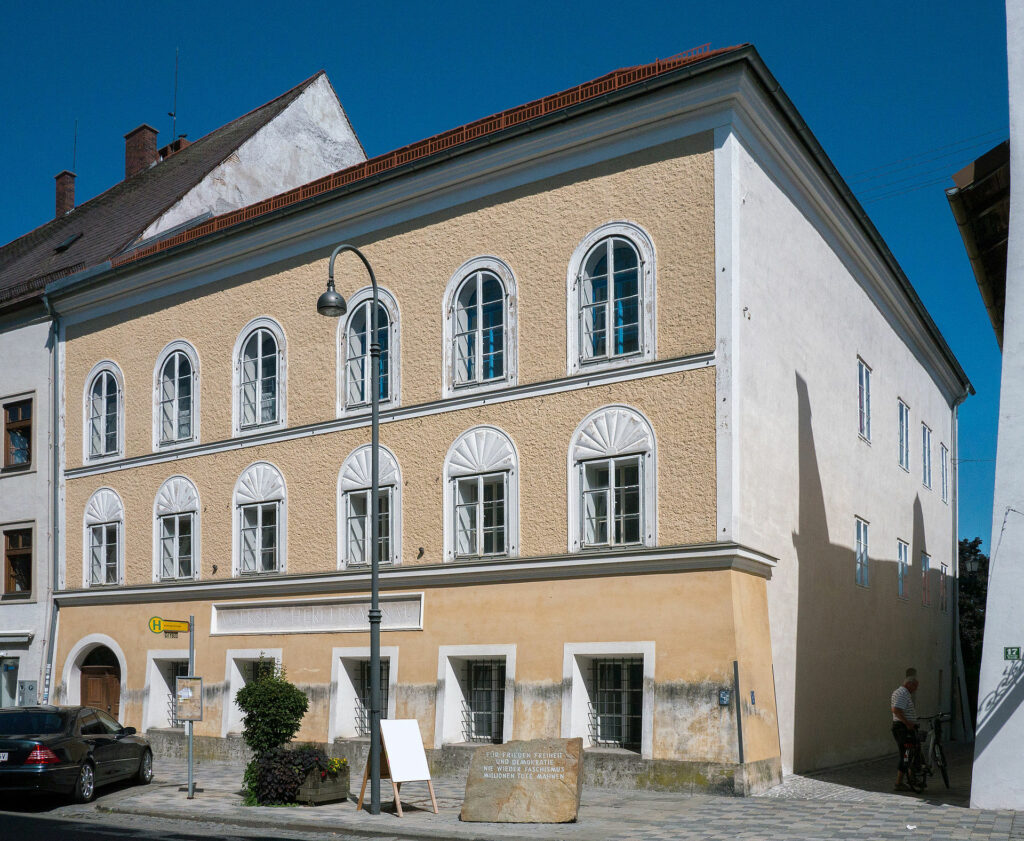 The similarities between two art works being auctioned next month by Christie’s and Sotheby’s in New York are striking. Both were created by the Austrian Expressionist Egon Schiele. And both once belonged to FritzGrünbaum, a Viennese cabaret performer whose large art collection wasinventoried by Nazi agents after he was sent to the Dachau concentration camp, where he died.But there is also a notable difference in the way the houses are handlingthe sales. END_OF_DOCUMENT_TOKEN_TO_BE_REPLACED

“ . . . I think we should come to terms with history.” And, he adds, “Nowadays, I don’t think a museum can afford not to approach this in a proactive and positive manner. What I think sets me apart from many other people of the same positive approach is that I think the best way to deal with it is to talk and to come to a mutually positive conclusion…”

We are very happy about Diethard Leopolds will to return looted artworks and therefore want to be of help in his efforts.

We kindly remind the Leopold Museum Privatstiftung of the claim for restitution regarding the collection Fritz Grünbaum, unanswered since February 15, 2011:

So, as stated by Diethard Leopold:

We are waiting for his reply!

By Gareth Harris. Market,  Issue 235, May 2012, The Art Newspaper
Published online: 10 May 2012
International dealers have joined forces to lobby against potential US legislation that could have a “significant and negative impact on the art market in New York”. The Art Dealers Association of America (ADAA), the Society of London Art Dealers (Slad) and the UK dealer Richard Nagy are unhappy about moves in a US court that could “dramatically limit the application of the laches doctrine”, which is a defence procedure commonly used in disputes over titles to works of art.
The trio has filed an amici curiae statement (a “friends of the court” supporting brief) relating to the long-standing legal row over ownership of an Egon Schiele drawing, Seated Woman With a Bent
Left Leg (Torso), 1917, which once belonged to the Austrian art collector Franz Friedrich “Fritz” Grünbaum. Two New York collectors, Charles Katzenstein and Nelson Blitz, have also contributed to the brief, according to the court documents; Katzenstein declined to comment.

The legal battle dates back to 2005, when the case was first heard in the US district court. It involves various parties including the US collector David Bakalar and Grünbaum’s heirs, the Czech citizen Milos Vavra, and the New York resident Leon Fischer.

Vavra and Fischer claim that the Nazis stole the drawing from their family (Grünbaum fled Vienna in 1938 and died at the Dachau concentration camp in 1941). Bakalar disputes this, claiming instead
that Grünbaum’s sister-in-law, Mathilde Lukacs, sold the drawing to the Swiss dealer Eberhard Kornfeld of the Galerie Gutekunst in 1956. Later that year, Kornfeld sold the piece to the Galerie
St Etienne in New York. In 1963, Bakalar bought the work from the Manhattan dealer in “good faith”, he says.

The case was first heard in the US district court in New York in 2005. Three years later, the court applied Swiss law and ruled in Bakalar’s favour. But, in 2010, the US court of appeals reversed
this decision, saying that New York law should apply. A district court ruled again in Bakalar’s favour in 2011. The case is now going through a second hearing in the appeals court.

The laches doctrine, which forms a major part of Bakalar’s defence, is now in jeopardy, according to the group. “For the past 25 years, good-faith purchasers of art have relied on the laches
doctrine to protect themselves from stale or frivolous claims to ownership,” state the court papers, that were filed at the end of March by the lawyers Jon Dean and Julian André of McDermott
Will & Emery LLP, which represents Nagy, the ADAA and Slad.
The trio is particularly alarmed over two specific changes that Vavra and Fischer are seeking.

Firstly, that the “duties of diligence relevant to a laches defence inquiry trigger only after thetrue owner learns of the location of the stolen chattel”. Secondly, that the “knowledge or actions
of a claimant’s ancestors cannot be imputed to the claimants when determining if laches should apply”. The group argues that Vavra and Fischer are seeking “to eliminate the laches doctrine’s
protections and make the time for claimants or their heirs to file a [recovery] action virtually limitless”—which means that each new generation of alleged heirs could potentially challenge title
to works of art.

Without such protection, buyers would “have to think twice about doing business in New York”. The group argues that collectors may even avoid lending works to New York-based museums, and might take their business to other US states where “the laws are more favourable to good-faith purchasers”.

“The laches doctrine is really the only defence a good-faith purchaser has against a claim,” says Gilbert Edelson, of law firm Katten Muchin Rosenman LLP, representing the ADAA. “A good faith
purchase must establish that a claimant delayed unreasonably in pursuing a claim.” Edelson gives a theoretical example of a claimant who does not sue immediately because heor she is aware of witnesses who might hurt his or her case. If those witnesses die, the claimant could choose to file a suit within the 20-year statute. Although the buyer could not assert a
defence under the statute of limitations, they could seek protection under the laches defence “because the claimant did not assert the claim promptly, and the death of witnesses prejudiced the defendant”.

But Raymond Dowd of Dunnington, Bartholow and Miller LLP, representing Vavra and Fischer, dismisses these arguments, calling the laches doctrine a “classic ‘sit on your hands’ defence [which] has traditionally been a very heavy burden [for claimants]”. He says that his clients do not want to eliminate the procedure, and are not arguing to “re-set” the clock for successive claims, but
emphasises that the onus should be on “purchasers to show that they have exercised due diligence. Bakalar has not demonstrated this.” Dowd adds: “Bakalarargues on this appeal that the whereabouts of Grünbaum’s art collection… remains a mystery. The reason why any ‘mystery’ remains is because Bakalar and certain art dealers have succeeded inblocking discovery in this proceeding.” Meanwhile, “Nagy has a direct financial interest in, and probable possession of [Schiele’s] Woman in Black Pinafore, 1911, which was stolen from Fritz
Grünbaum,” states the declaration filed by Dowd in opposition to the amici curiae.

But a later opposing motion disputes that the piece was stolen, saying that “while Nagy previously purchased an ownership interest in Woman in Black Pinafore, Nagy voided the purchase in October 2011 and no longer possesses [the work]”. The documents add that the London dealer has never handled any Schiele works with provenance relating to Mathilde Lukacs. Bakalar’s lawyer, William Charron of Pryor Cashman, says: “Dowd’s perspective isnot rooted in the evidence or in reality.”

It is a remarkable that now towards the end of the process, the art dealer represented by the London dealer Richard Nagy http://www.richardnagy.com participates in the proceedings. This commitment to the “Art Dealers Asociation” shows the real opponents of this procedure around looted art, namely deprived families versus art market. Richard Nagy is personally affected by this courts procedure, because part of his portfolio is the de facto inalienable Schiele painting from the collection of Fritz Grunbaum >> Woman in Black Pinafore, JK 888 << . As per “Art Basel, Daily newspaper, Thursday 16, june 2005” the painting was on offer by auction house Richard Nagy for € 650 000,–

cordially invites you to attend the lecture

In 1998, Manhattan District Attorney Robert Morgenthau seized Egon Schiele’s Dead City and Portrait of Wally at New York’s Museum of Modern Art, creating a scandal that changed the legal landscape of Europe and the United States for victims of Nazi persecution and their survivors.  Ray Dowd represents the heirs of Fritz Grunbaum, a Jewish cabaret performer murdered in the Dachau Concentration Camp.  Fritz’s wife Lily died in the Minsk Death Camp.  Grunbaum’s art collection surfaced in Switzerland in 1956 under disputed circumstances, and in the first Holocaust-era art recovery trial in U.S. history, Bakalar v. Vavra, the District Court found that passing the artwork through Switzerland gave it clean title.  The case is on appeal. Many of Fritz’s artworks are in the Leopold Museum and the Albertina Museum in Austria. In over ten years, Austria has not even bothered to respond to the heirs’ claim.

Listen to the speech

You can view the Powerpoint presentation that illustrates the audio here